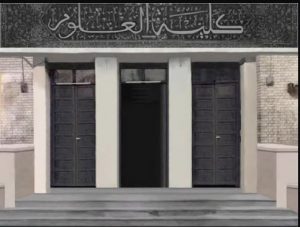 Faculty of Science was established on 27/3/1949 corresponding to 20 / Jumada I / 1368 as part of the Faculty of Arts and Sciences , has  identified the main duties care of science and liberal arts without adhere to the goal of graduation (professionals) specialists applied sciences (narrow), It contributed to the emergence of the first seed of modern scientific university education in Iraq, and it became the day of the establishment of the college (the Day of Science) in our country with merit. 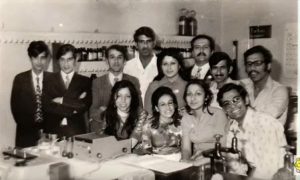 In 1953, the Department of Earth Science (Geology) was opened and received the first group of students in 1954. In 1983, the Department of Computer Science was established as an important link for the development of higher education in the country, and given the great importance witnessed by computer technology in the world, this young department has become Distinguished follow-up and care.

In 1992, before the introduction of preliminary studies, the Institute of Biotechnology for Postgraduate Studies was opened in the college, which is the only institute concerned with this vital scientific field, whether at the level of academic research or in meeting the needs of other sectors. 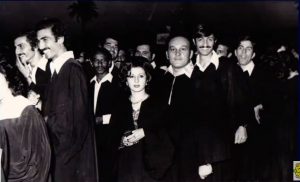 With this expansion of knowledge, science and technology, it was necessary to expand the size of the college and diversify its facilities, facilities and achievements. Therefore, the college moved from its old building in Adhamiya to the Baghdad University complex in Jadriya in 1983, where the college departments are distributed over a large area of ​​land, including Modern buildings designed for their purposes well, and surrounded by gardens that give the atmosphere of science and work a feature of order and stability. In view of the (cognitive) expansion to prepare students and the added fields of knowledge (sub- and detailed), it was decided to establish new buildings for the departments of Mathematics and Computer Science

The college has been able to supply large numbers of scientifically qualified graduates who hold bachelor’s, master’s and doctoral degrees, and in 1992 the college established an advisory office that is considered an advanced scientific edifice that aims to organize the relationship between the college and other state institutions to provide advisory, scientific and technical services at the scientific level. universally recognized. Many deans have succeeded in the deanship of the college, who have great credit for the college, with what they were able to achieve in terms of modernization and change that benefit and go in line with the style of development and urbanization that prevails in the world.

A master’s thesis is discussed in College of science, University of Baghdad, about the biostratigraphy and depositional environmental of Yamama formation in Faihaa oil field southern Iraq

In the College of science, University of Baghdad, a master’s thesis was discussed, tagged “Biostratigraphy and Depositional Environmental of Yamama Formation in Faihaa Oil Field Southern Iraq” by the research student Maryam Mohammad Taha and presented to the Geology Department under the supervision by Dr. Salam I.