The logo of the College of Science and its departments

First: The meaning and details of the College of Science logo

The official logo of the College of Science – University of Baghdad is shown in Figure No. (1) below: 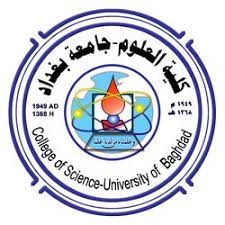 Figure 1: The official logo of the College of Science – University of Baghdad

The logo consists of the following details:

1- The outer rings:  They represent the geometric shape of the Baghdad city wall, with its four gates. The rings are in a circular shape that collects the details of what is inside, and it is a beautiful expression of the inclusion of the ancient College of Sciences on a number of important scientific disciplines, in addition to the historical meaning that refers to the college carrying the original Iraqi scientific heritage. These rings have been present in the original design of the logo since the eighties, and it has been commonly used in the logo of some colleges as well. For example, the Baghdad University logo contains the same external links, the College of Agriculture, the College of Education for Pure Sciences, Ibn Al-Haytham, the College of Education for Girls, and others.
2- Texts:  The upper text is the name of the college (College of Science-University of Baghdad) in Arabic in the form of a half-circle arched inward at the top of the logo, and its name ( College of Science-University of Baghdad ) in English in the form of a half-circle arched inward at the bottom of the logo. This is the last update of the official logo of the college in the year 2011, as the previous logo did not contain the name in English. Also in the center of the right is the date of the establishment of the college in the Gregorian and Hijri calendars written in Arabic, and on the left side it corresponds to the date in English.

3- Internal symbols:  a set of symbols developed to represent the scientific disciplines in the college and it is present in the first logo of the college since the eighties – note the figures (2,1) to (2.5) below:

a. A figure containing intersecting atomic paths in yellow and blue colors. This figure refers to the departments of physics in all its specializations. This shape was present in the original logo.

Figure (2.1): a figure representing the Department of Physics

NS. A shape that contains a blue liquid droplet topped by a red flame. The figure represents the disciplines of life sciences and biotechnology. This shape was present in the original logo.

Figure (2.2): A figure representing the divisions of life sciences and biotechnology

NS. Irregular rectangular parallelepiped, in red. The scheme in its current form reflects the Department of Chemistry Sciences. This shape is an evolution of the irregular hexagon in the original logo.

Figure (2,3): A figure representing the Department of Chemistry Sciences

Dr.. Open laptop computer shape, blue and brown. The figure describes the mathematics and computer sciences departments. This shape was present in the original logo as well. The noble verse in the base of the figure “And we taught him knowledge from us ” is part of verse number 65 in the blessed Surah Al-Kahf, and it was also previously present. 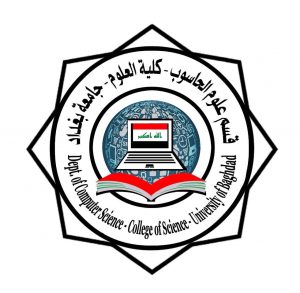 Figure (2.4): A figure representing the two departments of Mathematics and Computer Sciences

e. Irregular spherical shape on the left and right upper sides, blue. This figure expresses the ancient map of the Earth as laid down by the Arabs, which is why the logo describes the two divisions of earth sciences and astronomy. It has slightly evolved from the look in the original logo.

Figure (2.5): A figure representing the two departments of Earth Sciences and Astronomy 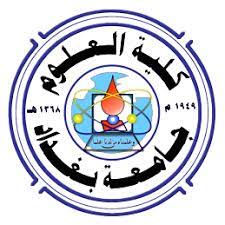 Third: The stages of development of the logo of the College of Science – University of Baghdad

The first logo set for the College of Science – University of Baghdad is shown in Figure (3) – with apologies for the poor quality of the image because it appears to be the only image available on the Internet on this subject. According to our information on the subject, this slogan was used from the foundation of the college in 1949 until the mid (or end) of the eighties of the last century. The emblem was also surrounded by a circle representing the Baghdad wall, with the blessed verse “And He will teach them the Book and wisdom,” a verse mentioned in Surat Al-Jumu’ah Verse No. 2, Surat Al-Imran Verse 164 and Al-Baqarah Verse 129. The basic form was the values ​​of ink writing the noble verse, in the middle of which is the shape of a hexagonal atom. Electrons. From the upper base of the pen branch out two undulating shapes representing the eternal rivers Tigris and Euphrates. That logo was devoid of the name in English and any details that refer to the rest of the scientific disciplines in the college.

Then, at the end of the eighties, the college logo was developed, as shown in Figure (4). This figure contains most of the details of the current logo, although it is not included in the English text. This slogan remained in circulation until the year 2008.

College logo during the nineties of the last century

In 2008, the logo was slightly modified in terms of general design and colors, as shown in Figure (5). This logo remained in use until the year 2011. The design of this logo was carried out in the former Information Technology Unit of the College. 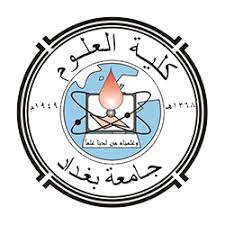 Finally, in 2011, the logo of the College of Science-University of Baghdad was last updated in the Information and Informatics Unit of the college, as shown in Figure (1) above. The last figure (6) shows the logo details – which can be printed and distributed to describe the logo details.

The current college logo (since 2011 to date), with a brief description of its details

A master’s thesis is discussed in College of science, University of Baghdad, about the biostratigraphy and depositional environmental of Yamama formation in Faihaa oil field southern Iraq

In the College of science, University of Baghdad, a master’s thesis was discussed, tagged “Biostratigraphy and Depositional Environmental of Yamama Formation in Faihaa Oil Field Southern Iraq” by the research student Maryam Mohammad Taha and presented to the Geology Department under the supervision by Dr. Salam I.